Pheochromocytomas are rare tumors and biochemically silent ones with normal catecholamine levels are even rarer. Up to date, biochemically inactive pheochromocytomas are poorly investigated. We aimed to systematically assess the pre- and peri-operative characteristics and the outcomes of patients with these tumors who had been treated and followed-up in 2 tertiary centers.

Ten patients (5 men) [median age at diagnosis 52.5 years (24–72)] were included. Adrenal masses were incidentally discovered in all patients except from one who presented with pheochromocytoma-related manifestations. Twenty-four-hour urine metanephrine and normetanephrine levels were in the low-normal, normal and high-normal range in 4, 4 and 2 patients and in 1, 6 and 3 patients, respectively. Tumors were unilateral [median size 46 mm (17–125)] and high density on pre-contrast CT imaging or high signal intensity on T2-weighted MRI scans were found in all cases. Pre-operatively, 5 patients were treated with phenoxybenzamine [median total daily dose 70 mg (20–100)]. Intra-operatively, 4 patients developed hypertension requiring vasodilator administration and 8 developed hypotension; vasoconstrictors were required in 5 cases. One patient, not pre-operatively treated with phenoxybenzamine, developed Takotsubo cardiomyopathy. During a median 24-month (12–88) follow-up period, one patient had disease progression. 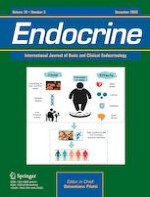