Motor experiences facilitate the maturation of the central nervous system in children, refining their postural and motor skills [ 1]. Moreover, certain physical and/or sport activities stimulate the postural and motor functions more than others. To improve these functions in an optimal way, physical and/or sport activity requires be completed by trying to react very quickly to a signal, to develop a muscle power or strength, to perform fast and well-coordinated motors skill and/or to perform technique movements in difficult postural conditions e.g. on monopodal dynamic stance.
Taekwondo (TKD) stimulates these motor abilities [ 2]. TKD focuses on kicking techniques. Rotation of the body and pivoting on one leg is an essential component in all of these kicking skills [ 3]. Elite TKD athletes turn and kick at high speeds (5.2 m/s to 16.26 m/s), and produce high striking forces (390.7 to 661.9 N) without losing balance [ 4]. The ability to perform fast and well-coordinated attack and defense actions are determining factors in TKD performance. To complete fast and powerful kicks, TKD practitioners require high muscle power and speed for kicking, and great dynamic postural control on the supporting leg. Therefore, the neuromuscular and postural abilities are determining factors for the athletes’ performance in competitions.
Anzeige
TKD training can improve knee and calf muscle strength in athletes at different levels of training [ 5– 7]. Heller et al. [ 6] reported that the leg muscle powers are above normal in elite TKD athletes. Elite semiprofessional TKD athletes also demonstrate greater knee muscle strength than TKD novices. Recreational athletes may also benefit from TKD training in terms of neuromuscular qualities [ 8].
Few studies have addressed the effect of TKD training on postural control performance [ 9– 13]. Noorul et al. [ 8] showed that, even with low-level TKD training (less than 4 h per week), recreational TKD practitioners had better balance performance than their sedentary counterparts when standing with their eyes closed after dropping from a height. TKD practitioners might even develop sport-specific balance ability [ 9, 14]. Seventeen weeks of TKD training could improve the balance time in single leg stance in elderly subjects [ 12]. Similarly, TKD training produced positive effects on balance and mobility in older adults, as indicated by the improvement in functional reach distance, Timed Up-and-Go test, walking velocity, and gait stability [ 11].
These two studies consistently showed that older adults could benefit from TKD training in terms of various balance components. To date, few studies have investigated the effects of TKD training in young healthy adolescents [ 9, 10, 14]. A study has shown that adolescents undertaking TKD training may have better balance performance than untrained subjects [ 9].
However, the effects of TKD training on the postural and neuromuscular functions were separately studied in healthy adults and adolescents, which does not allow the establishing of global effects of their functional abilities relative to posture and movement. In addition, these effects were not studied in healthy pre-pubertal children. Yet, with the increasing popularity of this sport and as many practitioners start training at a very young age [ 15], there is a need to examine the effect of TKD to ascertain whether TKD induces improvements in postural and neuromuscular functions in pre-pubertal healthy children. Hence, the aim of this study is to examine the postural and neuromuscular performances in healthy pre-pubertal male TKD practitioners in comparison to control males. It was hypothesized that the postural and neuromuscular performances of healthy pre-pubertal male TKD practitioners would perform significantly better in these tests than their non-TKD practicing counterpart.
Anzeige

All the procedures described in the present investigations were approved by the Ethics Committee of the University of Manouba, Tunisia.
Signed written consent to publish was obtained from the children’s parent or legal guardian.

Our population consisted of 17 pre-pubertal healthy males (age: 11.88 ± 0.33 years) taking only part in physical education lessons at school, for at least 3 years (non sport children), and 12 pre-pubertal healthy male TKD practitioners (age 11.66 ± 0.49 years) who had practiced TKD for 3.33 ± 0.49 years for four sessions a week (1 h30 per session). All the subjects were at Tanner’s stage 1 of puberty [ 16], with no differences in anthropometric characteristics between the 2 groups (Table  1). None of the subjects reported a history of hip, knee or ankle injury, or reported known pathological condition of the lower limb. All practitioners were right leg dominant, as ascertained by asking them which leg they preferred to kick a football with. All procedures were approved by Manouba University Institutional Review Committee. Written informed consent was obtained from all participants and their guiardian/parent after they had received both verbal and a written explanations of the experimental protocol and its potential risks and benefits. All participants and their parents were assured that they could withdraw from the trial without penalty at any time.
Table 1
Comparison of anthropometric measures (means ± standard deviations) between the non-athletic children and the taekwondo practitioners children. The significance level was set at P <0.05 (NS = non significant)

The experiment consisted in examining the anthropometric characteristics and the postural and neuromuscular (vertical jumps and sprint running) abilities for the two groups of subjects. Postural tests, vertical jump, sprint run tests, were administered over three different days, with one day of recovery between each day (i.e. between the postural control test, the vertical jump tests, and the sprint test) to avoid possible fatigue effects. All the tests were completed between 3 and 6 pm.

Subject’s height was measured (in cm) using a graduated and non-deformable measuring rod and their weight [body mass (BM) in kg] was evaluated using the EKS apparatus (Focus 9800, Sweden), without clothes and barefoot.

Leg length of both legs were measured (in cm) with the subjects lying supine on an examination couch using a standard tape measurer from the anterior superior iliac spine to the distal end of the medial malleolus [ 17].

The Star Excursion Balance Test (SEBT) measured DPC. This functional, unilateral balance test integrates a single-leg stance with maximum reach of the opposite leg [ 18] The SEBT was performed with the subjects standing in the middle of a grid placed on the floor with 8 lines extending at 45° increments from the center of the grid. The 8 lines on the grid were named in relation to the direction of reach with regard to the stance leg: Anterolateral (AL), Anterior (A), Anteromedial (AM), Medial (M), posteromedial (PM), Posterior (P), Posterolateral (PL), and Lateral (L) (Fig.  1).
×
The protocol by Hertel et al. [ 18] was followed and the reach distances were normalized by dividing each excursion distance (in cm) by the subject’s leg length (in cm) and then multiplying the value obtained by 100.

After a 10 min warm up (including progressive running exercises and stretching exercises), jumping height was assessed using an infrared photocell mat connected to a digital computer (Optojump System, Microgate SARL, Bolzano, Italy) by the same investigator. The optical acquisition system allowed the measurement of the contact time (t c) and the flight time (t f) during a jump, and calculated the height of the jump (h) to a precision of 1/1000s [ 19]. The height is measured using the equation as follows: h(cm) = g (t f) 2/8 (g : gravity).
For the squat jump (SJ) tests, the subjects started in the semi squat position with a knee flexion angle of nearly 90° and without moving, and the subjects had their hands placed on their hips. At the signal, the subject pushed off.
Countermovement jump (CMJ) tests started from an upright standing position with the subjects’ hands on their hips. At the signal, the subjects made a downward movement until reaching an approximate knee angle of 90°, and subsequently began to push-off. All subjects performed familiarization trials before undertaking three consecutive experimental trials for the two tests (SJ and CMJ). The highest value for each jump (test) was retained. Every subject was given a 15-s interval between attempts.

After a 15 min warm-up, the subject ran at his maximum speed a distance of 30 m from a standing start. Photoelectric cells (radio system, Microgate, Bolzano, Italy) were placed at 5, 10, 20 and 30 m. Each subject took the test three times with an interval of 5 min of recovery after each test. The best value (in s) for each distance was used for statistical analyses.

Statistical analyses were performed using SPSS for Windows software (version 17.0). The descriptive values are presented as mean and standard deviation. The reproducibility of measurements of DPC, SJ, CMJ and 30 m sprint were determined by calculating the interclass coefficient of correlation (ICC). The estimation of this coefficient was based on a process of analysis of variance (ANOVA): an ICC from 0.80 to 1.00 is considered very reproducible, 0.60 to 0.79 moderately reproducible, and less than 0.60 representing a questionable reproducibility. Before using parametric statistics, it was checked the normality of the test variables Shapiro-Wilk W. The independent t Test was used to detect any differences between two groups. Cohen’s effect sizes were also calculated using GPOWER software (Bonn FRG, Bonn University, Department of Psychology) [ 20]. The results were interpreted using the following criteria: 0.20 [small]; 0.50 [medium]; 0.80 [large] [ 21]. Significance level was set at p < 0.05.

The performances in postural control, vertical jumps and very short sprint running were significantly better in healthy pre-pubertal males TKD practitioners than for non-athletic males of the same age. TKD practice would stimulate sensory input and motor output of the postural system, which would improve its efficiency particularly in specific postural conditions, i.e. on one leg support. In addition, the dynamic nature of TKD could develop the power of the muscles of the lower limb. TKD training is likely to facilitate postural and neuromuscular functions in healthy children.

The authors would like to thank the “Ministère de l’enseignement supérieur et de la Recherche Scientifique, Tunisia” for financial support.

The data supporting the findings of the present studies are uploaded as supplementary material. 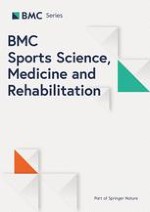 A pilot study on biomarkers for tendinopathy: lower levels of serum TNF-α and other cytokines in females but not males with Achilles tendinopathy