Multiple models have attempted to predict morbidity of liver resection (LR). This study aims to determine the efficacy of American College of Surgeons National Surgical Quality Improvement Program (ACS-NSQIP) surgical risk calculator and the Physiological and Operative Severity Score in the enUmeration of Mortality and Morbidity (POSSUM) in predicting post-operative morbidity in patients who underwent LR.

A retrospective analysis was conducted on patients who underwent elective LR. Morbidity risk was calculated with the ACS-NSQIP surgical risk calculator and POSSUM equation. Two models were then constructed for both ACS-NSQIP and POSSUM—(1) the original risk probabilities from each scoring system and (2) a model derived from logistic regression of variables. Discrimination, calibration, and overall performance for ACS-NSQIP and POSSUM were compared. Sub-group analysis was performed for both primary and secondary liver malignancies. 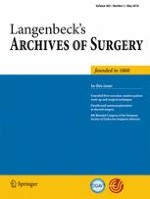 8th Biennial Congress of the European Society of Endocrine Surgeons