Bracing is the most commonly used treatment for scoliosis. But braces remain predominantly “handcrafted.” Our objective was to create a novel brace simulator using a high-fidelity 3D “avatar” of the patient’s trunk.

An observational cross-sectional study was constructed. The inclusion criteria were patients with a moderate idiopathic scoliosis (between 15° and 35° of Cobb angle) aged between 9 and 15 years old with an indication of brace treatment. Twenty-nine scoliotic patients, 25 girls and four boys, with a mean age of 12.4 years were included. Twenty right thoracic and 14 left lumbar were measured with a mean Cobb angle of 24°. 3D “avatars” were generated using a novel technology called the “anatomy transfer.” Biomedical simulations were conducted by engineers who were blinded to the clinical effect of the real patient brace. The in-brace Cobb angle effect (real effect) was compared with the virtual numeric in-brace Cobb angle observed using the blindly constructed avatar (simulation effect).

Incorporating high-fidelity copy of the entire 3D shape of the patient’s trunk and multiple 3D-reconstructed bony images into an anatomical reference avatar resulted in moderate-to-good prediction of brace effect in three quarters of patients. 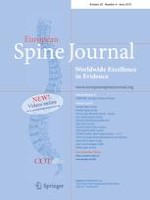 Clinical significance of traditional clinical parameters and inflammatory biomarkers for the prognosis of patients with spinal chondrosarcoma: a retrospective study of 150 patients in a single center

En bloc spondylectomy in patients older than 60 years: indications, results and complications in a series of 37 patients