The most common vasculitis in children is Henoch–Schönlein purpura (HSP) [ 1]. Its typical symptoms manifest in the skin, gastro-intestinal tract, joints, and kidneys, and the severity of the renal symptoms determines the long-term outcome. Of HSP patients, on average, 34% develop renal symptoms [ 2]. The symptoms are typically self-limiting proteinuria or hematuria, or both, but some patients develop severe proteinuria, and these patients are at greater risk for chronic kidney disease [ 3, 4].
For Henoch–Schönlein nephritis (HSN), the most common histologic classification is from the International Study of Kidney Disease in Children (ISKDC) [ 5]. Although it also considers mesangial proliferation, ISKDC classification is largely based on the percentage of glomeruli with crescents, and treatment modality selection is based on ISKDC grade. The prognostic value of the ISKDC classification is, however, questionable, giving rise to a need for a new classification [ 6, 7]. The Oxford classification for IgA nephropathy (IgAN), a disease with similar renal histology to HSN, appeared in 2009 [ 8]. The updated version of the Oxford classification (MEST-C) now considers five histologic parameters: mesangial hypercellullarity (M), endocapillary proliferation (E), segmental glomerulosclerosis (S), tubular atrophy and/or interstitial fibrosis (T), and crescents (C) [ 9]. However, in pediatric HSN, the feasibility of MEST-C requires still further research [ 7]. Furthermore, we recently introduced a semiquantitative classification (SQC) for histologic evaluation of HSN [ 10].
Anzeige
In this study, we evaluated ISKDC, SQC, and MEST-C scores in sequential renal biopsy specimens. Additionally, from diagnostic kidney biopsies, we analyzed immunohistochemically the expression of pro-fibrotic and inflammatory cell markers. Alpha-smooth muscle actin (α-SMA) and vimentin are pro-fibrotic markers, whereas P-selectin glycoprotein ligand-1 (PSGL-1) is a marker for inflammatory cells; early detection of the processes featuring these markers could prove important in enabling early treatment before the development of fibrosis. The aim of our study was to evaluate the prognostic value of (1) the ISKDC, SQC, and MEST-C classifications and (2) the expression of pro-fibrotic and inflammatory markers. Our hypothesis was that expression of these markers in the diagnostic kidney biopsies correlates with the findings in the follow-up renal biopsy, and that their expression is higher in HSN patients than in control samples from normal kidneys.

Definition of proteinuria was urine protein to creatinine ratio (UP/C) > 20 g/mol, daily urine protein excretion (dU-Prot) > 200 mg, or a positive urine dipstick test (1+ to 3+). UP/C values at the time of the renal biopsies were converted into dU-Prot [ 12], and values over 40 mg/h/m 2 denoted nephrotic-range proteinuria. Definition of hematuria was > 20 red blood cells/10E6/L or a positive urine dipstick test (1+ to 3+). Glomerular filtration rate was estimated (eGFR) with the bedside Schwartz equation [ 13]. Medical records provided data from the time of the diagnostic and follow-up biopsies and the last follow-up. Time from the onset of nephritis (proteinuria and/or hematuria) to renal biopsy and initiation of treatment was calculated. Patients ( n = 2) who had not received immunosuppressive therapy were not included in the treatment delay analyses. Follow-up time was the period from HSP-diagnosis to the latest follow-up visit or to the start of renal replacement therapy. Indication for the diagnostic renal biopsy was either nephrotic-state proteinuria or persistence of proteinuria and/or hematuria up to 6–8 weeks. The 26 patients formed two groups at follow-up renal biopsy: patients without proteinuria (group I; n = 11) and with proteinuria (group II; n = 15). Eleven patients had no proteinuria at follow-up biopsy: nine of them underwent follow-up biopsy as part of a previous trial in accordance with the study protocol [ 11], one due to hematuria, and one for control purposes.

Renal pathologists blinded to the patients’ medical history re-evaluated the biopsies with the ISKDC classification, SQC, and MEST-C. A detailed explanation of SQC parameters exists in our previous study [ 10]; the classification is also visible in online Table S1. Briefly, SQC comprises 14 renal histologic parameters and has a maximum score of 26 points; it divides into activity (maximum 9 points) and chronicity indices (maximum 16 points). In addition, a tubulointerstitial (including all active and chronic tubular and interstitial parameters) index can be calculated (maximum 5 points). The MEST-C scoring system of the Oxford classification includes five parameters and is defined as follows: M (mesangial hypercellularity defined as more than four mesangial cells in any mesangial area) as M0 (< 50% of glomeruli with mesangial hypercellularity) or M1 (> 50%); E (endocapillary proliferation) as E0 (absent) or E1 (present); S (segmental glomerulosclerosis) as S0 (absent) or S1 (present); T (tubular atrophy and/or interstitial fibrosis) as T0 (0–25% of cortical area affected), T1 (26–50%), or T2 (> 50%) and C (crescents) as C0 (absent), C1 (at least 1 crescent, but crescents in a maximum of 25% of glomeruli) or C2 (> 25%). In addition, total MEST-C score was calculated (sum of all five MEST-C parameters).

Diagnostic renal biopsy specimens, formalin-fixed and paraffin-embedded, were cut into 4–5-μm-thick slices. They underwent a conventional immunohistochemical staining process. Primary antibodies were used against α-SMA (clone 1A4, diluted 1:400, Dako Denmark A/S, Glostrup, Denmark), vimentin (clone 3B4, 1:200, Dako), and PSGL-1 (sc-13535, 1:500, Santa Cruz Biotechnology, Inc., Dallas, TX, USA). Eighteen (69%) biopsies were successfully stained with α-SMA, 19 (73%) with vimentin, and 17 (65%) with PSGL-1. Negative controls containing no primary antibodies were incubated in phosphate-buffered saline. Normal kidneys, originally removed with an intent to use as kidney transplants, served as control specimens. Supplementary material contains images (Figures S1– S3) of typical expression of the analyzed molecules in HSN patients and in control specimens.
The microscopy tool used was Zeiss AX10. Analyses of the HSN biopsy specimens involved all glomeruli (with × 20 magnification) and as many microscopic fields as possible from the cortical tubulointerstitium (× 40). Analysis of each control specimen included 30 randomly selected glomeruli (× 20) and 30 randomly selected, non-overlapping tubulointerstitial microscopic fields (× 40). Zeiss Zen software (Carl Zeiss AG, Oberkochen, Germany) performed calculation of the tubulointerstial area of positive α-SMA and vimentin staining. The number of PSGL-1 staining patches was counted from the tubulointerstitium and glomeruli. In evaluation of the staining results, scores of all microscopic fields and glomeruli were totaled separately for control specimens, group I, and group II. To assess correlation with staining results and biopsy findings in HSN patients, mean of the microscopic fields’ affected areas (α-SMA, vimentin) and the mean number of staining patches in the tubulointerstitium and glomeruli (PSGL-1) represented the scores for each patient. Patients’ clinical data was not available when conducting the immunohistochemical analyses.

The statistical analysis software used was IBM SPSS version 22 (IBM Corp, Armonk, NY). Continuous variables are reported as means and standard deviations (SD) (normal distribution) or medians and interquartile ranges (IQR) (non-normal distribution), and analyzed with Student’s t test (normal distribution) or Mann–Whitney U test (non-normal distribution). Categorical variables are reported as numbers and percentages, and analyzed with Fisher’s exact test. Change in histologic variables from the diagnostic biopsy to the follow-up biopsy was analyzed with McNemar test (MEST-C parameters) or Wilcoxon-signed rank test (SQC parameters). Spearman rank correlations were calculated between staining results, biopsy findings, and biopsy delays. Results from linear regression are reported as regression coefficients ( B value) with 95% confidence intervals. Predictors with p < 0.2 in univariable analysis were selected to the multivariable analysis. The level of statistical significance was p < 0.05.

Authors thank Tuike Helmiö for her excellent technical assistance with the immunohistochemical stainings. 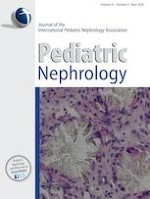 Transitioning adolescents to adult nephrology care: a systematic review of the experiences of adolescents, parents, and health professionals

Hypokalemia and hearing loss in a 3-year-old boy: Answers