We included 518 patients who had undergone ESD for 558 lesions from April 2012–September 2018. Patients were classified into fibrosis or no-fibrosis groups, and logistic regression analysis was performed to identify predictive factors of fibrosis. Subgroup analyses were performed for fibrosis degree.

The total incidence of fibrosis was 21.1% (mild: 14.1%; severe: 7.1%). Although the curative resection rate (free margin: invasion depth less than 1000 μm: no lymphatic invasion, vascular involvement) was lower in the fibrosis group compared with the control (80.7% vs. 97.6%), neither the en bloc resection rate (99.1% vs. 100%) nor incidence of perforation (0.9% vs. 0.2%) differed between the two groups. Multivariate analysis revealed that a cecal location, preoperative biopsy, straddling fold, laterally spreading tumor–non-granular-pseudo-depressed (LST-NG-PD) type were predictive of mild fibrosis. The presence of a straddling fold and a protruded lesion were independent predictive factors of severe fibrosis.

We identified the predictive factors of mild and severe fibrosis. It is preferable that a more experienced physician performs ESD for the lesions with F2 fibrosis. 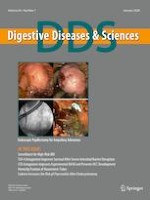