Clinical behaviour of atypical meningiomas is not uniform. While, as a group, they exhibit a high recurrence rate, some pursue a more benign course, whereas others progress early. We aim to investigate the imaging and pathological factors that predict risk of early tumour progression and to determine whether early progression is related to outcome.

Adult patients with WHO grade II meningioma treated in three regional referral centres between 2007 and 2014 were included. MRI and pathology characteristics were assessed. Gross total resection (GTR) was defined as Simpson 1–3. Recurrence was classified into early and late (≤ 24 vs. > 24 months).

Atypical meningiomas are a heterogeneous group of tumours with 16.8% patients having recurrence within 24 months of surgery. Residual tumour, parafalcine/parasagittal location, peritumoural oedema and a MI > 7 were all independently associated with early recurrence. As administration of adjuvant radiotherapy was not protocolised in this cohort, any conclusions about benefits of irradiation of WHO grade II meningiomas should be viewed with caution. Patients with early recurrence had worse neurological outcome. While histological and imaging characteristics provide some prognostic value, further molecular characterisation of atypical meningiomas is warranted to aid clinical decision making. 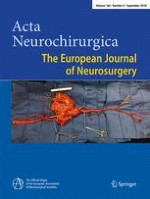 External neurolysis as a treatment for foot drop secondary to weight loss: a retrospective analysis of 200 cases

How I Do it - Vascular Neurosurgery - Aneurysm

Posterior interosseous nerve entrapments: review of the literature. Is the entrapment distal to the arcade of Frohse a really rare condition?

Letter to the Editor - Brain trauma

Intracranial pressure (ICP) monitoring in diffuse brain injury: to do or not to do?