Responsible gambling (RG) measures are methods aimed at reducing and preventing negative consequences associated with gambling. Some RG measures are set by authorities or gambling operators while others are available as features for gamblers to use themselves (e.g. budget tools where personal monetary limits are set prior to gambling). The present study is based on a general gambler population and investigates how RG measures with some specific RG features are assessed by the gamblers. The data was collected in 2013 and 2015. The samples were drawn from the Norwegian Population Registry. In total 9129 gamblers participated. Gamblers were asked to state to which degree they agreed that ten specific RG measures help or would help them controlling their gambling. Overall, between 35 and 42% neither agreed nor disagreed, but among those with an opinion, most agreed. A multiple regression analysis identified eleven variables as significant predictors of positive beliefs about RG measures: female gender, young age, playing random games only, being a moderate risk or problem gambler, reporting high impact from gambling advertisements as well as the personality traits agreeableness, openness and neuroticism. Playing low risk games only, reporting a high amount of spending on gambling and the personality trait extraversion were inversely related to positive beliefs about RG measures. The total explained variance was however only 7.1%. Positive beliefs about RG measures can relate to needs for external based countermeasures to minimize or reduce problems. Negative views may reflect a wish to play without obstacles, take risks or to trust in self-control. 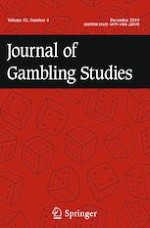 The Effects of Social Class on Individuals’ Decision-Making Tendencies in a Prestige-Money Game: Social Value or Instrumental Value?