The primary objective of this study was to determine significant predictors of length of stay (LOS) beyond the first postoperative day after urogynecological surgery.

Two hundred and sixty-three patients were included in this study. A logistic regression analysis identified route of surgery and trial of void recordings as the two statistically significant predictors of stay beyond the first postoperative day. The odds of LOS after laparoscopic or open surgery compared with vaginal surgery increased more than fivefold [laparoscopic vs. vaginal approach odds ratio (OR) 5.04, 95 % confidence interval (CI) 1.95–13.03; laparotomy vs. vaginal OR 15.56, 95 % CI 1.77–136.77] and more than threefold for a prolonged pass of the bladder protocol compared with an immediate pass (OR 3.25, 95 % CI 1.54–6.87).

Our study identified route of surgery and trial of void recordings as the two predictors with the greatest impact on LOS beyond the first postoperative day. Our results warrant a larger follow-up study. 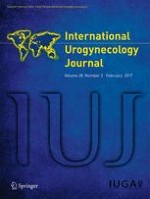 Bladder rupture with incomplete rupture of the uterus

The myth: in vivo degradation of polypropylene-based meshes

In vivo polypropylene mesh degradation is hardly a myth