Pre-operative data, after 1 year and after 5 years, was collected from the medical records. Descriptive analyses and bivariate hypothesis tests were performed first, and then, a generalised linear regression model with Tweedie distribution was adjusted. The hit rate and the Kendall coefficient of concordance (Kendall’s W) of the equation were calculated. At the end, the Mann-Whitney test was performed between the BMI, WR and the presence of comorbidities, after a post-operative period of 5 years.

The adjustment of the model resulted in an equation that estimates the mean value of BMI 5 years after surgery. The hit rate was 82.35% and the value of Kendall’s W was 0.85 for the equation. It was found that patients with comorbidities presented a higher median WR (10.13%) and a higher mean BMI (30.09 kg/m2) 5 years after the surgery. 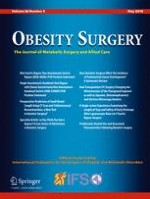 Rare Entities of Histopathological Findings in 755 Sleeve Gastrectomy Cases: a Synopsis of Preoperative Endoscopy Findings and Histological Evaluation of the Specimen

Low-Purine Diet Is More Effective Than Normal-Purine Diet in Reducing the Risk of Gouty Attacks After Sleeve Gastrectomy in Patients Suffering of Gout Before Surgery: a Retrospective Study