The prevalence of xeroderma pigmentosum (XP) is quite low in Europe, which may result in a delay in determining the appropriate diagnosis. Furthermore, some subtypes of XP, including XPA, may manifest themselves with quite severe neurological symptoms in addition to the characteristic dermatological lesions. Accordingly, the aim of the current study is to highlight the predominant neurological aspects of XPA, as well as mild-to-moderate dermatological signs in a Hungarian family with 5 affected siblings.

In summary, we present the first family with genetically confirmed XPA in the Central-Eastern region of Europe, clearly supporting the notion that disturbed function of the C-terminal region of the XPA protein contributes to the development of age-dependent neurologically predominant signs. This case series may help clinicians recognize this rare disorder. 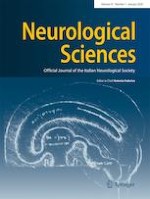 Uterine epilepsy: a historical report from Avicenna’s point of view