Breast surgery is an exceedingly common procedure and associated with an increased incidence of acute and chronic pain. Preemptive regional anesthesia techniques may improve postoperative analgesia for patients undergoing breast surgery. The aim of this study was to evaluate the effect of preoperative bilateral serratus plane block on postoperative opioid consumption in patients undergoing breast reduction surgery.

SPB can be used safely bilaterally in the management of pain for breast reduction surgery as it is easy to perform, provides excellent analgesia, and reduces opioid consumption and opioid sparing effect. 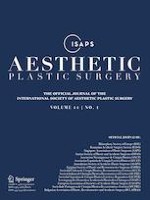 New Insights into the Three-Dimensional Anatomy of the Facial Mimetic Muscles Related to the Nasolabial Fold: An Iodine Staining Technique Based on Nano-computed Tomography

Application of the Bracing System in Reduction Malarplasty in Asian Population

New Insights into the Three-Dimensional Anatomy of the Facial Mimetic Muscles Related to the Nasolabial Fold: An Iodine Staining Technique Based on Nano-computed Tomography (Discussion)

Breast Asymmetry, Classification and Algorithm of Treatment: Our Experience

The Breast Implant ARC: An Algorithm for Determining the Position of the IMF in Breast Augmentation Planning