This retrospective study included 832 embryos obtained from rcp carriers and 382 embryos from RT carriers that were biopsied in 139 PGD cycles. The control group involved embryos obtained from age-matched patient karyotypes who were undergoing preimplantation genetic screening (PGS) with non-translocation, and 579 embryos were analyzed in the control group. A single blastomere at the cleavage stage or trophectoderm from a blastocyst was biopsied, and 24-chromosomal analysis with an aCGH/SNP microarray was conducted using the PGD/PGS protocols. Statistical analyses were implemented on the incidences of cumulative aneuploidy rates between the translocation carriers and the control group.

There was not enough evidence to prove that ICE was present in embryos derived from both rcp and RT translocation carriers, regardless of the maternal age. However, chromosomal numerical abnormalities were noticed in 23 pairs of autosomes and sex chromosomes in parental structurally normal chromosomes. Thus, 24-chromosomal analysis with an aCGH/SNP microarray PGD protocol is required to decrease the risks of failure to diagnose aneuploidy in structurally normal chromosomes. 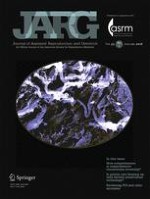 Comparison of pregnancy outcomes after vitrification at the cleavage and blastocyst stage: a meta-analysis