Epidemiological studies show that maternal cigarette smoking is associated with an increased risk of cardiovascular diseases in postnatal life. Baroreflex sensitivity (BRS) is an important index for evaluating the homeostasis of the cardiovascular system. This experiment was designed to investigate the possible mechanism of prenatal nicotine on the adult male offspring’s heart rate (HR) increase due to BRS. Pregnant rats received the 0.3 ml of saline or nicotine (1.5 mg kg−1) by subcutaneous injection from gestational days 3 to 21. The male offsprings of saline injected dams were the control group, and the male offsprings of the nicotine injected dams were the nicotine group. The 90-day-old male offsprings’ funny current (I f) of their sinoatrial node (SAN) cells, BRS induced by intravenous injection of angiotensin (Ang) II in the presence or absence of the L-nitro-arginine methylester (L-NAME), cervical vagal activity, c-fos protein levels of the cervical spinal cord-8 to the thoracic spinal cord-5 (C8–T5) lateral horn neuron, and blood hormones were tested. The results showed that prenatal nicotine exposure had no effect on the offsprings’ I f of their SAN cells, but it significantly decreased the offsprings’ BRS. The c-fos protein levels of the C8–T5 lateral horn neurons and the blood catecholamine levels were increased in the nicotine group, but the cervical vagal activity was not changed. After intraventricular injection of L-NAME, the nicotine exposed offsprings’ BRS was partly recovered. These data suggest that prenatal nicotine exposure results in hyper reactivity of the spinal sympathetic nerve center and a higher peripheral catecholamine hormone state of 90-day-old male offsprings, and these may be the reason for the BRS inhibition and HR increase. Nitric oxide (NO) may participate in the process acting as an important neurotransmitter. 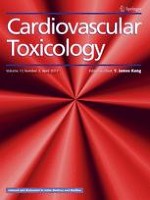