The study sample included 78 type 2 diabetes mellitus patients with an average BMI < 30 kg/m2 at baseline. Patients’ parameters were analyzed before and after surgery, with a 2-year follow-up. A univariate logistic regression analysis and multivariate analysis of variance between the remission and improvement group were performed to determine factors that were associated with type 2 diabetes remission after RYGB. Linear correlation analyses between FCP and metabolic parameters were performed. Patients were divided into two groups: FCP > 1 ng/ml and FCP ≤ 1 ng/ml, with measured parameters compared between the groups.

FCP level is a significant predictor of diabetes outcomes after RYGB in low-BMI Chinese patients. An FCP level of 1 ng/ml may be a useful threshold for predicting surgical prognosis, with FCP > 1 ng/ml predicting better clinical outcomes following RYGB. 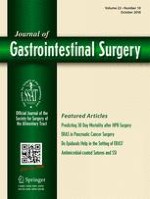 Correlation Between Clinical and Pathologic Staging in Colon Cancer: Implications for Neoadjuvant Treatment

The Efficacy of Antimicrobial-Coated Sutures for Preventing Incisional Surgical Site Infections in Digestive Surgery: a Systematic Review and Meta-analysis

Use of Epidural Analgesia in Sigmoidectomy: Is There Any Advantage in the Era of Minimally Invasive Surgery?