This prospective study evaluated the effect of bevacizumab on the hypertrophy of the future liver remnant (FLR) after portal vein occlusion (PVO) before major hepatectomy for colorectal liver metastases.

Twenty-seven patients with colorectal liver metastases treated with preoperative FOLFOX/FOLFIRI chemotherapy regimen since 2002 were evaluated for the degree of hypertrophy of the FLR after right PVO. The results were compared with a similar group of 13 patients treated since 2006 with a chemotherapeutic regimen including bevacizumab and PVO. The FLR was measured by volumetric computed tomography 4 weeks before and after PVO.

Bevacizumab may impair hypertrophy of the FLR after PVO in preparation for major hepatectomy particularly, in patients aged ≥60 years and those who receive six or more cycles of bevacizumab, suggesting that major liver resection should be considered with caution in patients who have received bevacizumab. 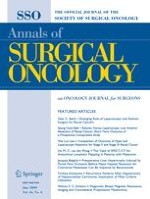 Surgical Strategies and Histopathologic Issues in the Management of Lentigo Maligna