The optimum implant placement in cementless total hip arthroplasty (THA) is important to obtain stable, long-term clinical results. Conversely, implant malposition can cause postoperative prosthetic impingement, resulting in postoperative dislocation, implant failure, excessive polyethylene wear, and decreased postoperative range of motion [ 1]. Developmental dysplasia of the hip (DDH), which accounts for 80 % of hip osteoarthritis in Japanese patients, is associated not only with problems in the acetabulum but also with variations in femur morphology [ 2, 3]. In cases where cementless metaphyseal fit stems are fixed using the press-fit method, the stems are likely to induce strong anteversion or retroversion and cause prosthetic impingement [ 4]. Additionally, cementless THA using the operative technique which prepares the socket first can also cause prosthetic impingement. In order to prevent prosthetic impingement, the combined anteversion (CA) technique, which combines the anteversion of the femoral stem and the acetabular socket, has been revised in recent years [ 5, 6]. Furthermore, it is necessary to keep CA within the safe zone [ 7, 8]. In THA applying the CA technique, typically the stem is placed first, and the angle of the stem anteversion is fixed. Next, based on the angle of the stem anteversion, the angle of the socket anteversion is adjusted to avoid impingement during the surgery [ 9, 10]. However, the neck portion of many stem models often obstructs the acetabular socket placement using the operative technique which prepares the femoral stem first. To counteract this, we loaded preoperative computed tomography (CT) images into the Kyocera 3D-template ® (Kyocera Medical, Osaka, Japan), a THA planning software, and estimated the angle of the stem anteversion preoperatively and adjusted the angle of the socket anteversion so that CA was kept within the safe zone. Our target was to maintain the combined anteversion in the safe zone of 40° ± 15° [ 5– 8, 10]. Intraoperatively, the socket was first placed at the planned angle of anteversion using the navigation system; then, the femoral stem was placed to fit into the bone marrow cavity of the femur [ 11– 13]. The aim of this study was to investigate whether postoperative CA can be kept within the safe zone while using the operative technique which prepares the socket first in cementless THA for DDH, by estimating the anteversion of the metaphyseal fit stem using preoperative three-dimensional (3D) computerized planning and by adjusting the anteversion of the socket using a navigation system that considers CA.

The normality of the continuous data was assessed with Levene’s test. Since the data were distributed normally, the unpaired Student’s t test was used. Intraobserver variances for the JOA’s hip score were determined by comparing separate assessments of the same patient by the same observer with at least a 2-week interval between assessments. Intraobserver and interobserver variances in the JOA’s hip score were expressed using interclass correlation coefficients (ICC) with ICC < 0.20 indicating slight agreement, 0.21–0.40 fair agreement, 0.41–0.60 moderate agreement, 0.61–0.80 substantial agreement, and >0.80 almost perfect agreement [ 24]. The relationship between the native femoral version and the postoperative stem version, the 3D-planned stem version and the postoperative stem version was examined using correlation analysis. The relationship between the radiographic anteversion of the socket, the postoperative stem version, and adherence to the safe zone of postoperative CA was investigated using a scatter diagram. SPSS for Windows version 20 (IBM, Armonk, NY, USA) was used for all statistical analyses. A p value <0.05 was used to indicate statistical significance.

DDH, which accounts for 80 % of hip osteoarthritis among Japanese patients, is associated not only with problems in the acetabulum but also with variations in femur morphology [ 2, 3]. In cases where cementless metaphyseal fit stems are fixed using the press-fit method, the stems are likely to induce anteversion or retroversion and cause prosthetic impingement [ 4]. Additionally, cementless THA using the operative technique which prepares the socket first can also cause prosthetic impingement. In order to prevent prosthetic impingement, the CA technique, which combines anteversion of the femoral stem and the acetabular socket, has been proposed in recent years [ 5, 6]. The CA technique is especially useful for cementless THA using the operative technique which prepares the stem first, but there are concerns that the stem may be an obstacle in the operating field on the acetabular side while using this approach. Similarly, the infrared light navigation system for placing the socket positioned on the ilium may obstruct the stem insertion process while performing THA using the direct lateral approach [ 16]. To counteract this, we preoperatively calculated the 3D-planned stem version using the Kyocera 3D-template ® based on CT images for THA and used the CA technique in cementless THA using the operative technique which prepares the socket first. Previously, Mckibbin et al. [ 26] reported that the sum of acetabular and femoral anteversion ranged from 30° to 40° in their cadaver study. Subsequently, the values for the safe zone in CA were reported by Widmer et al. [ 7] and Yoshimine et al. [ 8] in their mathematical studies. We often observe that strong anteversion or retroversion occurs in DDH patients with THA that uses cavity-occupying cementless stems. The cases with planned stem version angles of more than 50° in the 3D planning software-based CT were targeted to have less than 55° of the CA, while the cases with planned stem anteversion angles of less than 0° were targeted to have more than 25° of the CA. The rest were targeted to be within the angle range of 30°–50°. As a result, our goal was to maintain the combined anteversion in the safe zone of 40° ± 15° [ 5– 8, 10]. This study shows that by generating preoperative 3D images that consider CA, 3D-planned stem versions can provide a highly accurate estimate of postoperative stem versions. Moreover, in addition to positioning the socket in the estimated angle of anteversion, using a navigation system allows for control of CA within the safe zone over 90 % of the time. On the other hand, there was a difference of 7.7° (SD 9.6°, range −12.2° to 34.8°) between native femoral versions and postoperative stem versions, showing that merely considering the native femoral version is not sufficient for estimating the postoperative stem version [ 27, 28]. Dorr and Berry reported that dislocation after THA was induced not only by prosthetic impingement but also by other factors, for example soft tissue imbalance, the surgical approach, the patient’s education, and appearance of bone-to-bone impingement before prosthetic impingement [ 29, 30]. We were able to prevent the intraoperative dislocation tendency and postoperative dislocation by using preoperative 3D planning, considering CA. It is important to consider CA in order to avoid prosthetic impingement and dislocation after THA for DDH that has morphological differences on the femoral side, by estimating the stem version using 3D computerized planning and by adjusting the angle of anteversion of the socket using a navigation system that considers CA. By doing this, it is possible to prevent prosthetic impingement even in cementless THAs for DDH using the operative technique which prepares the socket first. The problems in this study include the lack of consideration of the following factors: (1) Two hips that used a conical stem due to a greater than 55° angle of 3D-planned femoral anteversion with the Kyocera 3D-template ® were excluded, (2) our conclusions are limited due to the small number of cases ( n = 65), and (3) the retrospective design of the study, without a control group, only yields an evidence grade of IV for this report.

The postoperative stem version of the metaphyseal fit stem can be estimated based on preoperative 3D computerized planning. Regarding morphological differences on the femoral side associated with DDH, by estimating these differences using preoperative 3D computerized planning and by adjusting the angle of anteversion of the socket using a navigation system that considers CA, postoperative CA can very frequently be kept within the safe zone, even with cementless THA using the operative technique which prepares the socket first.
Anzeige

This study was approved by our institution’s scientific research board and conducted in accordance with the World Medical Association Declaration of Helsinki Standard of 1964, as revised in 1983 and 2000. All patients were informed about the study in detail prior to obtaining written informed consent for enrollment, including consent for postoperative CT imaging.
Open AccessThis article is distributed under the terms of the Creative Commons Attribution 4.0 International License ( http://​creativecommons.​org/​licenses/​by/​4.​0/​), which permits unrestricted use, distribution, and reproduction in any medium, provided you give appropriate credit to the original author(s) and the source, provide a link to the Creative Commons license, and indicate if changes were made. 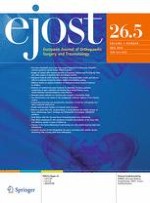