Prescription opioids (POs) are commonly prescribed to patients living with HIV/AIDS, while the illicit use of POs remains a major public health concern throughout Canada and the United States. We sought to identify the prevalence and correlates of PO injection among HIV-positive people who inject drugs (PWID) in Vancouver, Canada, where HIV/AIDS treatment and care is offered at no cost. We examined data from 634 individuals from an ongoing prospective cohort of HIV-positive PWID. Between December 2005 and November 2013, the median prevalence of recent PO injection was 24.2 % [interquartile range (IQR): 21.5–25.8 %]. In a multivariable generalized estimating equation model, Caucasian ethnicity, heroin injection, and drug dealing were positively associated with PO injection, while older age and methadone maintenance treatment were negatively associated with PO injection (all p < 0.05). Engagement on antiretroviral therapy was inversely associated with PO injection in a bivariable analysis, but did not remain significant after adjusting for heroin injection. These findings describe a particularly vulnerable sub-group of PWID who may benefit from targeted efforts to both minimize drug-related risk behaviors and support HIV/AIDS treatment. 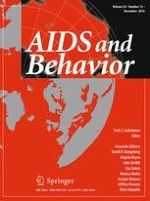 Relationship-Based Predictors of Sexual Risk for HIV Among MSM Couples: A Systematic Review of the Literature

Estimates of CDC-Funded and National HIV Diagnoses: A Comparison by Demographic and HIV-related Factors