Nearly 13 % of the children presented a psychiatric diagnosis according to DSM-IV, being more prevalent among males than females (14.7 and 11.7 %, respectively, p = 0.009). Anxiety disorders were the most prevalent of all disorders (8.8 %) and specific phobias (5.4 %) and separation anxiety disorder (3.2 %) were the most common subtypes. Attention deficit hyperactivity disorder (2.6 %), oppositional defiant disorder/conduct disorder (2.6 %), and depression (1.3 %) were also diagnosed. More than one psychiatric disorder was presented by 17 % of children. Socioeconomically disadvantaged children had a higher prevalence of psychiatric disorders.

Our findings underline the early onset of psychiatric disorders among children and the frequent occurrence of psychiatric comorbidity. Early prevention is needed in the field of mental health in Brazil and should start during infancy. 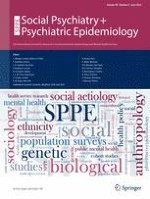 Trajectory and predictors of depressive symptoms among adolescent survivors following the Wenchuan earthquake in China: a cohort study

How do neighborhoods affect depression outcomes? A realist review and a call for the examination of causal pathways