Whereas the prevalence and impact of vascular pathology in Alzheimer diease (AD) are well established, the role of vascular and Alzheimer pathologies in the progression of neurodegeneration and cognitive impairment in Parkinson disease (PD) is under discussion. A retrospective clinico-pathologic study of 100 patients with autopsy proven PD (including 44 cases with dementia/PDD) and 20 cases of dementia with Lewy bodies (DLB) confirmed essential clinical (duration of illness, Mini-Mental State Examination/MMSE, age at death) and morphologic differences between these groups; Lewy body Braak scores and Alzheimer pathologies (neuritic Braak stage, cortical Aβ plaque load, and generalized cerebral amyloid angiopathy or CAA) were significantly higher/more severe in DLB and PDD than in PD without dementia. Duration of illness showed no association to any of the examined pathologic parameters, while there was a moderate association between LB scores and neuritic Braak stages, the latter significantly increasing with age. Significant association between cerebrovascular lesions and neuritic Braak stage was seen in PDD but not in PD subjects without dementia. These data suggest an influence of Alzheimer-related lesions on the progression of the neurodegenerative process and, in particular, on cognitive decline in both PDD and DLB. On the other hand, both these factors in PD and DLB appear to be largely independent from coexistent vascular pathology, except in cases with severe cerebrovascular lesions or those related to neuritic AD pathology. Assessment of ApoE genotype in a small number of cases showed no significant differences in the severity of Aβ plaque load and CAA except for much lower intensities in non-demented ε3/3 patients. Despite increasing evidence suggesting synergistic reactions between α-synuclein (αSyn), tau and Aβ-peptides, the major protein markers of both AD and Lewy body diseases, and of both vascular pathology and AD, the molecular background and pathophysiological impact of these pathologies on the progression of neurodegeneration and development of cognitive decline in PD await further elucidation. 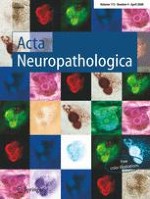