Prevalence and seasonal variation of hypovitaminosis D and its relationship to bone metabolism in healthy Hungarian men over 50 years of age: the HunMen Study | springermedizin.de Skip to main content
TOOLBAR 1 2 3 4
SUCHE MENÜ 1 2 3 4

The aim of this study is to characterize the prevalence and seasonal variation of hypovitaminosis D and its relationship to bone metabolism in healthy Hungarian men over 50 years of age.

The mean (range) age of the volunteers was 60 (51–81) years. The prevalence of hypovitaminosis D (25-OH-D, <75 nmol/L) was 52.9%. The prevalence of low (T-score < −1.0) BMD at the FN and LS was 45% and 35.4%, respectively. The mean (range) FRAX hip fracture and FRAX major osteoporotic fracture was 0.8% (0–9.4%) and 3.8% (1.7–16%), respectively. On comparing the vitamin D sufficient to the insufficient group, there was a statistically significant difference between the FRAX hip fracture and FRAX major osteoporotic fracture indexes. There was significant seasonal variation in the vitamin D levels; the lowest levels were measured in winter and the highest in summer.

A high prevalence of hypovitaminosis D and low BMD were observed in the studied Hungarian male population. This is the first study reporting higher 10-year hip and major osteoporotic fracture probability using the country-specific FRAX algorithm in individuals with hypovitaminosis D. 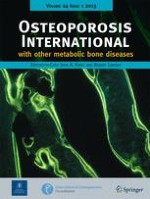 Relationship between use of antidepressants and risk of fractures: a meta-analysis

The effect of treatments for osteoporosis on mortality

Comment on Kanis et al.: Pitfalls in the external validation of FRAX

Defining the epidemiology of bisphosphonate-associated osteonecrosis of the jaw: prior work and current challenges