The purpose of this study was to determine the prevalence of the C-shaped root canal configuration, location of the longitudinal groove, sex differences, and unilateral/bilateral presence in mandibular first and second molars in a Saudi population using cone beam computed tomography (CBCT).

CBCT images for the mandibular first and second molars of 487 patients (a total of 529 first molars and 681 s molars) were evaluated. The teeth were assessed for the presence of C-shaped root canals according to Fan criteria. Subdivisions were also made according to sex, direction of the longitudinal groove, and unilateral/bilateral presence.

Only one C-shaped mandibular first molar was observed (0.19%), whereas 62 second molars (9.1%) exhibited C-shaped anatomy. Unilateral presence of the C-shaped root canal system was more common (53.85%). Female patients had a higher prevalence than males. Longitudinal grooves were most commonly found on the root lingual surface (58.1%).

Tooth type, patient sex, and ethnicity can help clinicians predict the prevalence of the C-shaped canal system in mandibular molars. 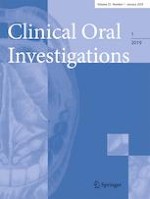 Comparison of efficiency of the retreatment procedure between Wave One Gold and Wave One systems by Micro-CT and confocal microscopy: an in vitro study

The correlation between the quality of oral hygiene and oral HPV infection in adults: a prospective cross-sectional study

Comparison of mucosal and mucoperiosteal wound cover for the treatment of medication-related osteonecrosis of the jaw lesions: a retrospective cohort study