To assess the prevalence of symptoms of dumping syndrome after LSG compared with LRYGB.

A single surgical group at a high-volume (700 cases per year) Bariatric and Metabolic Surgery Center of Excellence.

One thousand four hundred seventy-one LRYGB (366) and LSG (1105) patients received a questionnaire to assess symptoms of dumping syndrome, utilizing a modified version of the Sigstad scoring system. Dumping syndrome was considered to be present when the questionnaire score exceeded a threshold value.

Dumping syndrome after LSG is prevalent but has not been widely reported. This finding may impact clinicians and patients in their choice of procedure and has relevance in post-operative education and care. 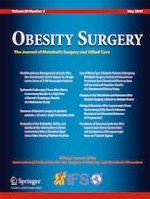 Bariatric Surgery in the Elderly Patient: Safety and Short-Time Outcome. A Case Match Analysis: Letter to the Editor

Timing of Gestation After Laparoscopic Sleeve Gastrectomy (LSG): Does It Influence Obstetrical and Neonatal Outcomes of Pregnancies?