Although femoroacetabular impingement (FAI) has recently been considered to be one of the causes of osteoarthritis (OA) of the hip, the exact pathogeneses and incidence of FAI and primary OA are unknown. The purposes of this study were to investigate the causes of hip OA in Japan and to clarify the prevalence of FAI in patients with hip OA. We retrospectively investigated 817 consecutive patients (946 hips) who underwent primary surgery with the diagnosis of OA of the hip. Clinical recordings and preoperative radiographs were evaluated to determine the cause of OA. There were 17 hips who had primary OA, of which six hips were determined to be FAI positive. The remaining 11 cases without FAI had primary OA of unknown aetiology. Our study has revealed that most hip OA cases were caused by developmental dysplasia of the hip. We only found a few cases (0.6%) with FAI in Japan. 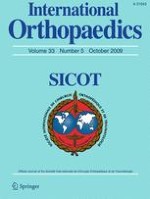 Triple pelvic osteotomy in the treatment of Legg-Calve-Perthes disease

Pattern of limb amputation in a Kenyan rural hospital