Prevalence of MRI findings in the cervical spine in patients with persistent neck pain based on quantification of narrative MRI reports | springermedizin.de Skip to main content
TOOLBAR 1 2 3 4
SUCHE MENÜ 1 2 3 4

Previous studies of patients with neck pain have reported a high variability in prevalence of MRI findings of disc degeneration, disc herniation etc. This is most likely due to small and heterogenous study populations. Reasons for only including small study samples could be the high cost and time-consuming procedures of having radiologists coding the MRIs. Other methods for extracting reliable imaging data should therefore be explored.
The objectives of this study were 1) to examine inter-rater reliability among a group of chiropractic master students in extracting information about cervical MRI-findings from radiologists´ narrative reports, and 2) to describe the prevalence of MRI findings in the cervical spine among different age groups in patients above age 18 with neck pain.

Adult patients with neck pain (with or without arm pain) seen in a public hospital department between 2011 and 2014 who had an MRI of the cervical spine were identified in the patient registry ‘SpineData’. MRI-findings were extracted and quantified from radiologists’ narrative reports by second-year chiropractic master students based on a set of coding rules for the process.
The inter-rater reliability was quantified with Kappa statistics and the prevalence of the MRI findings were calculated.

In total, narrative MRI reports from 611 patients were included. The patients had a mean age of 52 years (SD 13; range 19–87) and 63% were women. The inter-observer agreement in coding MRI findings ranged from substantial (κ = 0.78, CI: 0.33–1.00) to almost perfect (κ = 0.98, CI: 0.95–1.00).
The most prevalent MRI findings were foraminal stenosis (77%), uncovertebral arthrosis (74%) and disc degeneration (67%) while the least prevalent findings were nerve root compromise (2%) and Modic changes type 2 (6%). Modic type 1 was mentioned in 25% of the radiologists’ reports. The prevalence of all findings increased with age, except disc herniation which was most prevalent for patients in their forties. 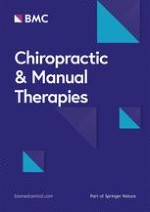 Measuring biopsychosocial risk for back pain disability in chiropractic patients using the STarT back screening tool: a cross-sectional survey

The efficacy of muscle energy techniques in symptomatic and asymptomatic subjects: a systematic review