One hundred twenty two children including both boys and girls aged between 6 y and 11 y were selected from a school at Navi Mumbai and their parents were given the National Innovative for Children’s Healthcare Quality (NICHQ) Vanderbilt Assessment Scale to be filled and returned, which was subsequently analyzed using SPSS (version 16).

The prevalence of attention deficit hyperactivity disorder was 12.3 % with boy to girl ratio of 3:2. It was more prevalent in nuclear type of family and in families where a single parent was working especially where the father was the sole breadwinner and doing semi-skilled or unskilled type of work. No significant relation was found between the numbers of work-related hours when parents were away from children and attention deficit hyperactivity disorder.

Attention deficit hyperactivity disorder is prevalent in the primary school-going population of Navi Mumbai, especially in boys. The increased prevalence in nuclear families and families with single working parent should further be explored. Further studies with larger sample size and longer period of follow up may be recommended. The study also recommends screening of school children for symptoms of attention deficit hyperactivity disorder (ADHD) for early diagnosis and treatment. 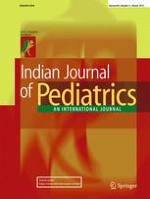 Incidence and Etiology of Acute Kidney Injury in Southern India

Eating Disorders among Adolescents in a Tertiary Care Centre in India