Hematological abnormalities are common in HIV positive patients. Of these, thrombocytopenia is a known complication which has been associated with a variety of bleeding disorders. However, its magnitude and related factors have not been well-characterized in the era of highly active antiretroviral therapy (HAART) in Ethiopia. Therefore, this study aimed to assess the prevalence of thrombocytopenia before and after initiation of HAART among HIV positive patients attending Black Lion Specialized Hospital, Addis Ababa, Ethiopia. 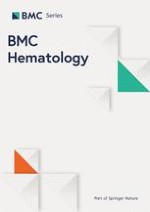 Albumin, copper, manganese and cobalt levels in children suffering from sickle cell anemia at Kasumbalesa, in Democratic Republic of Congo

Infections in patients with aplastic Anemia in Chiang Mai University

Prevalence, types and determinants of anemia among pregnant women in Sudan: a systematic review and meta-analysis

Prevalence of cytopenias in both HAART and HAART naïve HIV infected adult patients in Ethiopia: a cross sectional study