Delayed bleeding is the major adverse event in upper gastrointestinal endoscopic treatment (UGET). We aimed to investigate the efficacy of vonoprazan, which is the novel strong antisecretory agent, to reduce the risk for delayed bleeding in comparison with proton pump inhibitors (PPIs) in UGET.

This retrospective population-based cohort study used the Diagnosis Procedure Combination database in Japan. We included patients on vonoprazan or PPI in UGET between 2014 and 2019. The primary outcome was delayed bleeding. We conducted propensity score matching to balance the comparison groups, and logistic regression analyses to compare the bleeding outcomes.

We enrolled 124,422 patients, in which 34,822 and 89,600 were prescribed with vonoprazan and PPI, respectively. After propensity score matching, the risk for delayed bleeding was lower in vonoprazan than in PPI (odds ratio [OR], 0.75; 95% confidence interval [CI], 0.71–0.80), consistent with sensitivity analysis results. In the subgroup analyses of seven UGET procedures, vonoprazan was significantly advantageous in esophageal endoscopic submucosal dissection (E-ESD) (OR, 0.71; 95% CI, 0.54–0.94) and gastroduodenal endoscopic submucosal dissection (GD-ESD) (OR, 0.70; 95% CI, 0.65–0.75), although correction for multiple testing of the outcome data removed the significance in E-ESD. These results were also consistent with sensitivity analysis results. In the five other procedures, no significant advantage was found.

This nationwide study found that, compared with PPI, vonoprazan can reduce delayed bleeding with approximately 30% in GD-ESD. Vonoprazan has the possibility to become a new treatment method for preventing delayed bleeding in this procedure. 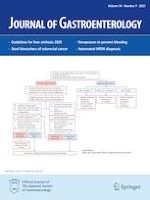 Risk of metastatic recurrence after endoscopic resection for esophageal squamous cell carcinoma invading into the muscularis mucosa or submucosa: a multicenter retrospective study