The purpose of this paper was to present the current knowledge on the prevention of group B streptococcus (GBS) neonatal infections and the status of prevention policies in European countries and to present the DEVANI pan-European program, launched in 2008. The aim of this program was to assess the GBS neonatal infection burden in Europe, to design a new vaccine to immunize neonates against GBS infections, to improve the laboratory performance for the diagnosis of GBS colonization and infection, and to improve the methods for the typing of GBS strains. The current guidelines for GBS prevention in different countries were ascertained and a picture of the burden before and after the instauration of prevention policies has been drawn. After the issue of the Centers for Disease Control and Prevention (CDC) guidelines, many European countries have adopted universal screening for the GBS colonization of pregnant women and intrapartum prophylaxis to colonized mothers. Nevertheless, some European countries continue advocating the risk factor approach to GBS prevention. Most European countries have implemented policies to prevent GBS neonatal infections and the burden of the disease has decreased during the last several years. Nevertheless, further steps are necessary in order to develop new strategies of prevention, to improve microbiological techniques to detect GBS colonization and infection, and to coordinate the prevention policies in the EU. 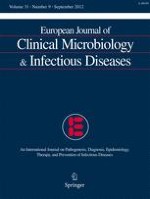 Underestimation of Clostridium difficile infection among clinicians: an international survey

Long-term trends in the epidemiology of human leptospirosis (Slovak Republic, 1954–2006)