The risk factors for recurrence in primary spontaneous pneumothorax (PSP) in children are not well known. We aimed to identify possible risk factors, and to evaluate the utility of computerised tomography (CT) scans in predicting future episodes.

We reviewed children aged < 18 years admitted to our institution for PSP from 2008 to 2017, excluding those with malignancies. Basic demographic data were extracted. Clinical data collected include pneumothorax laterality, CT results, treatment protocols and recurrences.

This is the first study demonstrating that surgery at first presentation appears to predict for occurrence of PSP on the contralateral lung. CT appears to be ineffective in detecting blebs and predicting PSP occurrence. 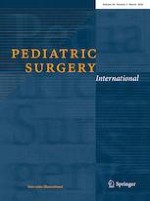 Laparoscopic surgical technique to enhance the management of anorectal malformations: 330 cases’ experience in a single center

Treatment patterns and outcomes for pancreatic tumors in children: an analysis of the National Cancer Database