We present a case of primary synovial sarcoma arising from the left heart, an extremely rare occurrence, with a large amount of necrotic tissue, which suggested a poor prognosis. After incomplete tumor resection, chemotherapy and radiation therapy were performed; however, PET/CT findings at 26 months after the operation revealed local recurrence. Although we performed two additional operations following chemotherapy, the patient died from local recurrence at 36 months after the initial operation. In this case of synovial sarcoma arising from the left heart, even though aggressive multimodality therapy was performed, the prognosis was still poor. 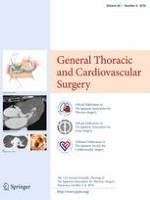 Correction to: Expression of kallikrein-related peptidase 13 is associated with poor prognosis in esophageal squamous cell carcinoma