Femoro-acetabular impingement (FAI) is known as a predisposing factor in the development of osteoarthritis of the hip. In order to treat this condition, hip arthroscopy is considered as the gold standard in recent years. The number of performed hip arthroscopies has risen immensely. However, a number of patients with poor outcome after hip arthroscopy will require further surgical intervention, sometimes even conversion into THR (total hip replacement). The purpose of this study was to analyze whether outcomes of THR are affected by prior hip arthroscopy in these patients.

Thirty-three THR after hip arthroscopy patients were successfully matched to control patients. There was no significant difference in mHHS between both groups (FAI treatment group 92.8 vs. control group 93.8, p = 0.07). However, FAI treatment group showed a lower mHHS score pre-operatively (48 vs. 60, p = 0.002). There was no significant difference in surgical time and post-operative complication rate. No heterotopic ossification could be found.

A prior hip arthroscopy has no affect to clinical outcomes of subsequent THR. 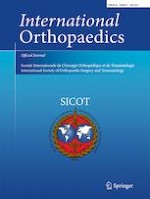 Contemporary cemented versus uncemented hemiarthroplasty for the treatment of displaced intracapsular hip fractures: a meta-analysis of forty-two thousand forty-six hips