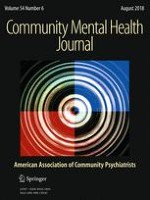 “I Believe I Know Better Even than the Psychiatrists What Caused It”: Exploring the Development of Causal Beliefs in People Experiencing Psychosis

Correction to: Mental Health in China: Stigma, Family Obligations, and the Potential of Peer Support

Public Awareness and Attitude Towards Depression: A Community Based Study Among an Adult Population in Ile-Ife South-Western Nigeria