Eight murine monoclonal antibodies (MAbs) against a synthetic peptide corresponding to the C-terminal 15-amino-acid portion of the ORF3 protein of rat hepatitis E virus (ratHEV) were produced and characterized. Immunofluorescence assays using the anti-ratHEV ORF3 MAbs revealed the accumulation of ORF3 protein in the cytoplasm of PLC/PRF/5 cells transfected with ORF3-expressing plasmids or inoculated with cell-culture-generated ratHEV strains. Anti-ORF3 MAbs could capture ratHEV particles in culture supernatant and serum following treatment with 0.5 % deoxycholate, but not those without prior detergent treatment or fecal ratHEV particles. Following treatment with 0.5 % deoxycholate and 0.5 % trypsin, the buoyant density of ratHEV particles in culture supernatant with ORF3 protein on the surface shifted from 1.15 g/cm3 to 1.26 g/cm3 in a sucrose gradient; the resulting particles were capturable by an anti-ORF2 MAb but not by an anti-ORF3 MAb. This indicates that the ORF3 protein (at least its C-terminal portion) is incorporated into the enveloped ratHEV virions released from infected cells but that it is not found in the virions in the feces, supporting the hypothesis that the ratHEV ORF3 protein is associated with the egress of virions from infected cells, similar to human HEV, despite the fact that the ratHEV ORF3 protein lacks a PSAP amino acid motif. 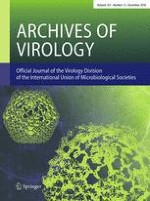 Molecular epidemiology of the enteroviruses associated with hand, foot and mouth disease/herpangina in Dongguan, China, 2015

The molecular epidemiology of bovine rotaviruses circulating in Iran: a two-year study