Despite the best efforts of the medical community, the morbidity and mortality associated with candidemia remains elevated, with crude mortality rates of ≥40 % [ 1– 3]. In addition, population-based studies conducted in the USA and Europe suggest that the incidence of candidemia has increased during the last decade [ 4– 6]. Patients admitted to intensive care units (ICUs) are at high risk of developing candidemia, with recent multicenter studies reporting that 30–40 % of candidemic patients were in ICUs at the time of the diagnosis. Delays in initiating antifungal therapy may increase mortality rates in patients with candidemia [ 7, 8]. Consequently, serious attempts have been directed to validating predictive guidelines based on risk factors and/or the presence of fungal biomarkers in order to assist clinicians in their decision to provide early antifungal therapy to patients at high risk [ 9– 12].
In Latin America, overall mortality rates of patients with candidemia are usually higher than those observed in the Northern Hemisphere [ 13– 15]. However, it should be noted that data on the epidemiology and prognostic factors associated with candidemia in patients admitted to ICUs in Latin America are scarce. Therefore, the main objective of this study was to evaluate historical trends in the epidemiology and clinical management of patients admitted to ICUs in tertiary care hospitals in Brazil, as well as to identify the prognostic factors of candidemia.
Anzeige

This is a retrospective analysis of a collection of candidemia cases created by merging the databases of five prospective laboratory-based surveillance cohorts conducted in 22 tertiary care medical centers in Brazil between March 2003 and February 2012. Only tertiary care hospitals providing medical care in most medical specialties participated in these five studies, and they can be categorized as public hospitals ( n = 13), which provide medical assistance to low-income patients, and private hospitals ( n = 9), which are for-profit medical institutions that provide care mostly to patients covered by private insurance plans. These hospitals are representative of public and private reference medical centers located in 12 large cities in Brazil. In the first two cohorts, only patients from public hospitals were enrolled, while in the latter three cohort studies, the patients were from a mixture of public and private hospitals.
An investigator at each medical center was assigned the specific task of contacting the microbiology laboratory of the hospital on a weekly basis in order to collect clinical and epidemiological data of all incident cases of candidemia. This investigator was trained to record such data on a standard case report form using a dictionary of terms that included all definitions of underlying conditions and medical exposures collected during the study. The case report form, dictionary of terms and strategy for data collection were the same in all five surveillance studies. Patients were followed up to 30 days after the incident candidemia or death. A case of candidemia was defined as the incident isolation of Candida spp. from a blood culture. The date of the incident candidemia was defined as the date of the collection of the blood culture that became positive for Candida species. Candidemia occurring >30 days after the incident isolation was defined as a new case. Fever was defined as an axillary temperature of ≥37.8 °C and neutropenia as an absolute neutrophil count of <500/mm 3. Cardiac and lung diseases were considered if the patient presented any cardiac or lung condition requiring active treatment. Such conditions included (but were not restricted to) congestive heart failure, coronary arterial disease, hypertension and cardiac arrhythmias (cardiac diseases), as well as chronic obstructive pulmonary disease, asthma, emphysema, bronchiectasis or chronic pneumonia or interstitial disease of any etiology (lung disease). Renal failure was defined as any documented serum creatinine value of >1.5 g/dL.
With the exception of invasive medical procedures and antibiotic use, we considered all these manifestations documented up to 30 days before the date of the incident candidemia as conditions associated with candidemia. Data on central venous catheters, dialysis and antibiotic use were captured up to 15 days before the onset of candidemia. Data on surgery requiring general anesthesia was captured up to 3 months before candidemia. All medical records were reviewed and monitored by a central data collection system for the analysis of completeness and consistency. In cases of uncompleted or inconsistent clinical forms, queries were generated and sent back to the investigators for corrections or completion.

For this analysis we excluded patients aged <18 years. We compared candidemia occurring in ICU patients versus non-ICU patients in terms of baseline characteristics, clinical manifestations, species distribution, treatment and outcome. In addition, we arbitrarily defined two 5-year periods (2003–2007, period 1; 2008–2012, period 2) and compared the epidemiological characteristics of ICU patients admitted in these two periods. Additional analyses included comparison of the epidemiology of candidemia in ICU patients from public versus private institutions. Finally, prognostic factors for ICU patients with candidemia were identified by comparing patients who died versus those who survived for 30 days after the candidemia episode.
Categorical variables were analyzed using chi-square or Fisher’s exact tests, as appropriate, and continuous variables were compared using the Wilcoxon test. A p value of <0.05 was considered to be statistically significant. Variables significant at p < 0.1 by univariate analysis were included in a multivariate model (backward and forward). Statistical analyses were performed using SPSS version 15.0 (SPSS, Inc., Chicago, IL).

In this study we observed that while the 30-day crude mortality rate of patients with candidemia admitted to an ICU was very high, it decreased from 76.4 % in period 1 (2003–2007) to 60.8 % in period 2 (2008–2012). We also observed that among the predictors of outcome identified by multivariate analysis, the use of an echinocandin as primary therapy for candidemia was associated with a better outcome and that echinocandins were increasingly being used as primary therapy for candidemia in period 2.
Critically ill patients still represent a large proportion of patients who develop candidemia in tertiary care hospitals. In the present study, the proportion of candidemic patients in an ICU was 46.5 % over the entire study period and increased in period 2. As expected, compared to non-ICU patients, patients already admitted to an ICU when candidemia was diagnosed were more likely to have received antibiotics and invasive medical procedures, while cancer and transplantation were more frequent in non-ICU patients.
An interesting finding of our study relates to changes in the epidemiology and clinical management of candidemia over the 9-year period covered by this study. In parallel with the observed increase in the proportion of candidemic patients who had been exposed to fluconazole prior to being diagnosed with candidemia, we found a substantial rise in the proportion of candidemia due to C. glabrata. The association between previous exposure to fluconazole and candidemia due to C. glabrata has been extensively reported [ 16– 19]. While epidemiologic studies of candidemia in Latin America still show a relatively low proportion of candidemia caused by species that exhibit a lower susceptibility to fluconazole [ 14], the emergence of C. glabrata has been documented in other studies from the region [ 20– 22].
Anzeige
A dramatic finding in our study was the unacceptably high 30-day crude mortality of candidemic ICU patients, both in public and private hospitals. Indeed, two large studies published in the USA reported a decrease in the mortality rate of patients with candidemia during the last 10 years [ 5, 18]. The crude mortality rate in the EPIC study evaluating candidemia in ICUs was 42 % [ 23], and two European studies reported 30-day mortality of 47 % [ 24, 25]. The high mortality rate observed in our series may be multifactorial and include poor general clinical conditions of sick patients (especially from public hospitals), delays in making a diagnosis and the choice of treatment.
Interestingly, we observed a significant decrease in the crude mortality rate of patients with candidemia in the second period of the analysis. When we compared the clinical characteristics of patients from both periods, we found that age distribution and underlying conditions were similar, with the exception of neurologic and liver diseases, which were more common in period 2. In addition, the APACHE II score was slightly lower in period 2, although the difference was not statistically significant. We do not believe that these differences explain the significant reduction in the death rate in period 2—rather, important differences in the clinical management of candidemia did occur in period 2. Patients from the latter period were more likely to have been treated with echinocandins and less likely to have received deoxycholate amphotericin B. Various studies, including a randomized clinical trial [ 26] and a patient-level pooled analysis of randomized clinical trials [ 27], have shown that the outcome of candidemia is better when an echinocandin is used as primary therapy. Therefore, it is reasonable to assume that the observed decrease in 30-day crude mortality in period 2 may have been, at least in part, due to the increase in the use of echinocandins as primary therapy, especially since treatment with an echinocandin was an independent predictor of better outcome by the multivariate analysis.
As already reported in other studies, older age, treatment with corticosteroids and higher APACHE II score were associated with an increased risk of death [ 2, 25, 28– 31]. In addition, period 1 was also associated with a higher risk of death. It is possible that differences in factors related to patient care not captured in the present study contributed to the better survival observed in period 2.
Our study has a number of limitations related to its retrospective nature. For example, we did not have data to calculate incidence rates of candidemia in and outside the ICU. Likewise, data on trends in susceptibility of Candida bloodstream isolates could not be provided because of changing standards in reading the test over time. Nevertheless, according to the standards in each period, fluconazole resistance occurred in <10 % of isolates and was almost exclusively limited to C. glabrata and C. krusei (data not shown). Another limitation of our study is that the APACHE II score was not available in a significant proportion of cases, limiting the number of patients analyzed in the multivariate analysis. Likewise, since the time of central venous catheter removal is critical to an analysis of its impact on the outcome [ 32], we were not able to do such an analysis because the date of catheter removal was not available for the majority of patients.
Anzeige
In conclusion, we found a clear change in the epidemiology and clinical management of candidemia in ICU patients during the 9-year period of this study. The incorporation of echinocandins as primary therapy for candidemia in critically ill patients seems to be associated with better outcomes.

Our study was approved by the respective ethics committees of the participating hospitals and has therefore been performed in accordance with the ethical standards laid down in the 1964 Declaration of Helsinki and its later amendments. The ethics committees granted waiver for informed consent due to the observational nature of the study.
Open AccessThis article is distributed under the terms of the Creative Commons Attribution Noncommercial License which permits any noncommercial use, distribution, and reproduction in any medium, provided the original author(s) and the source are credited. 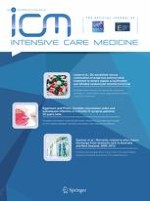 Our paper 20 years later: how has withdrawal from mechanical ventilation changed?