Primary vaginal carcinoma is rare, accounting for 1–2 % of all gynecological malignancies. Being rare, most observations are based on retrospective and comparative analyses. This study was aimed to retrospectively analyze the prognostic factors and its relevance in the outcomes of primary vaginal cancers.

Medical records of all cases of primary vaginal cancers, presented to Department of Oncology, from 2004 to 2012, at a tertiary care center in southern India, were retrieved from electronic medical records, and were analyzed.

The total number of cases was 32. Median age at presentation was 64.28 years. Squamous histology accounted for 84.4 %, with the rest being adenocarcinoma. Surgery was offered for five (15.6 %), and concurrent chemotherapy for 14 (43.8 %) patients. Three patients had only surgery. All others received radiotherapy. Twenty received external beam radiation (EBRT) and vaginal brachytherapy (VBT); seven only EBRT and two, adjuvant radiation. Five patients had residual disease; two, stage III, and three stage IV. Median follow-up was 55.83 months. Twelve patients were alive at last follow-up (37.5 %), while 14 were dead (43.8 %—8 of disease and 6 of other causes). Six patients were lost to follow-up (18.8 %). Twenty patients were disease free. Seven had recurrence, three loco-regional and four distant. Median overall survival (OS) was 86.1 months, disease-free survival (DFS) 90.17 months, and disease-specific survival (DSS) 97.13 months. When well and moderately differentiated tumors were taken together, the 5-year OS, DFS, and DSS rates were, 56.6, 64.3, and 82.3 %. For poorly differentiated tumors, median OS, DFS, and DSS were, 20.9, 14.6, and 20.9 months, with statistically significant advantage for better grade tumors, for DSS (p 0.050). Better 5-year OS, DFS, and DSS rates were observed for stage I + II group, with 54.9, 79.8, and 78.9 %, compared with advanced stage where the same were 54.8, 38.2, and 68.6 % (DFS—p 0.003, DSS—p 0.009). Grade and stage of tumor had statistically significant predictive value over the outcomes, while tumor size showed a significant trend. Patients treated with combination of EBRT and VBT fared well.

Our study could conclude that grade of differentiation was a significant predictor of poor survival as was stage of disease. Combination of VBT and external beam radiotherapy provides good DFS. 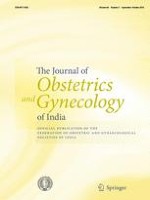