The subjects of this retrospective study were 734 consecutive patients who underwent definitive surgery for invasive breast carcinoma at our hospital between January 2004 and December 2006. MMBC was defined as ≥ 2 separate invasive unilateral breast tumors and pathological T stage was redefined based on the sum of the maximum diameter of each tumor. We evaluated disease-free survival (DFS) using the Kaplan–Meier method and Cox proportional hazards models.

Of the 734 patients, 136 (18.5%) had MMBC. The pathological T stage of 36 of the patients with MMBC was upstaged by adopting the sum of each focus. MMBC did not have any survival impact, but MMBC upstaged by the modified pathological T stage was associated with worse DFS than non-upstaging MMBC (P = 0.004). Multivariate analysis revealed that upstaging MMBC was an independent factor for poor prognosis and worse DFS (HR 2.757, P = 0.043).

MMBC itself may not be predictive of a worse prognosis; however, the sum of the invasive diameters of MMBC might be an important prognostic factor. Further studies are needed to confirm the prognosis associated with MMBC, taking into consideration the biological characteristics of each invasive focus. 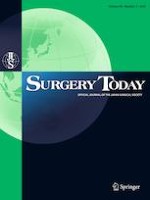 A prognostic index for colorectal cancer based on preoperative absolute lymphocyte, monocyte, and neutrophil counts

Correction to: Purse-string approximation vs. primary closure with a drain for stoma reversal surgery: results of a randomized clinical trial