The Turin criteria including solid, trabecular, and/or insular architecture, lack of typical nuclear features of papillary carcinoma, and mitoses, necrosis, or convoluted nuclei were adopted in the recent 4th edition of the World Health Organization classification published in 2017. 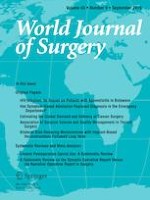 Medical Contraindications to Transplant Listing in the USA: A Survey of Adult and Pediatric Heart, Kidney, Liver, and Lung Programs

Surgical Training in South Africa: An Overview and Attempt to Assess the Training System from the Perspective of Foreign Trainees