The online version of this article (doi:10.​1007/​s00280-017-3339-0) contains supplementary material, which is available to authorized users.
G. Milaki and I. Messaritakis contributed equally to this work.

The detection of circulating tumor cells (CTCs) is of prognostic significance in several tumor types. The present study evaluated the detection and the clinical relevance of CK19mRNA(+) CTCs in patients with advanced/metastatic non-small cell lung cancer before and after front-line chemotherapy.

Peripheral blood was obtained from 642 patients with treatment-naïve unresectable stage IIIB and IV non-small cell lung cancer and from 455 patients after the completion of 1st line chemotherapy. RNA was extracted from peripheral blood mononuclear cells and the detection of CK19mRNA-positive cells was performed using a quantitative PCR assay.

The detection of peripheral blood CK19mRNA(+) CTCs before and after the completion of front-line chemotherapy is an adverse prognostic factor associated with poor clinical outcome in patients with stage IIIB/IV non-small cell lung cancer. 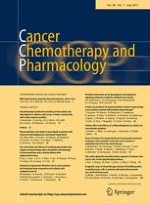 UGT1A1*6 polymorphisms are correlated with irinotecan-induced neutropenia: a systematic review and meta-analysis

Is there any predictor for hypersensitivity reactions in gynecologic cancer patients treated with paclitaxel-based therapy?