Attenuation corrected computed tomography (CTAC) is often performed to improve the specificity of single-photon emission tomography imaging. Extracardiac incidental findings are frequently observed. It is unclear whether these findings have any prognostic value.

This study shows that incidental findings are common and were associated with all-cause and cancer-specific mortality but only the later remained statistically significant after multivariable adjustment. 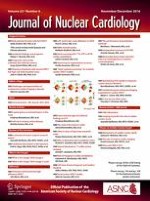 Quantifying FDG uptake to diagnose cardiac device infections: When and how should we do it?

Nuclear Cardiology in the Literature