This study evaluated the usefulness of semiquantitative and volumetric PET parameters for predicting prognosis in patients with advanced gastric cancer (AGC).

The recurrence rate was 32.4% (69/213 patients). Mean SUVmax and mean MTV of the recurrence group were significantly higher than those of the non-recurrence group (p = 0.026 and p = 0.025). TLR showed marginal significance (p = 0.051). In multivariate analysis for RFS including all patients, SUVmax (p = 0.022), TLR (p = 0.010), and PET score (p = 0.003) were independent prognostic factors. In post hoc analysis of PET score, significant differences in RFS were observed between PET scores 2 and 3 as well as scores 1 and 3. No significant difference in RFS was observed between scores 1 and 2. Only PET score was statistically significant for OS in univariate analysis. None of the PET parameters were statistically significant for OS in multivariate analysis.

High SUVmax and high MTV of the primary tumor suggest a high risk of recurrence for AGC patients. Even if SUVmax is similar, the prognosis may vary depending on MTV. Combining PET parameters results in a better prediction for prognosis. 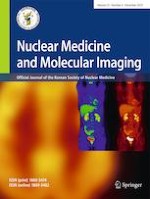 Radioembolization for the Treatment of Primary and Metastatic Liver Cancers