Morphometric analyses have shown that trunk muscle mass and density are associated with mortality in cancer patients. Because of the low incidence of spinal metastasis from gastrointestinal cancer and the limited life expectancy of these patients, few studies have been reported in this population. We evaluated the prognostic value of trunk muscle area and density in predicting overall survival.

The data from 78 patients with spinal metastases from gastrointestinal cancer, collected from February 2009 to July 2016, were evaluated. Psoas muscle and paravertebral muscle area and density were measured at the L3 level on CT scans taken at the time nearest to the diagnosis of spinal metastasis. Cox proportional hazards analysis was performed to evaluate the factors independently associated with overall survival. 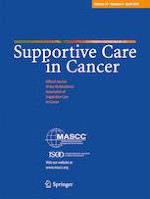 Frailty assessment prior to thoracic surgery for lung or esophageal cancer: a feasibility study