In community dwelling, 75-year-old women followed 10 years, a frailty index was created at each of three visits. Frailty score increased by ~ 6–7% annually. A higher frailty score was equivalent to being 5–10 years chronologically older. Frailty was associated with low bone density and higher risk of dying.

To understand the distribution of frailty among a population-based sample of older community-dwelling women, progression over 10 years, and association with mortality and osteoporosis.

The study is performed in a cohort designed to investigate osteoporosis. The OPRA cohort consists of 75-year-old women, n = 1044 at baseline, and follow-up at age 80 and 85. A frailty index (scored from 0.0–1.0) based on deficits in health across multiple domains was created at all time-points; outcomes were mortality up to 15 years and femoral neck bone density.

The frailty index was highly predictive of mortality showing a threefold increased risk of death in the frailest both in a shorter and longer perspective. Only one in ten older women escaped progression after 10 years. Frailty and osteoporosis were associated. 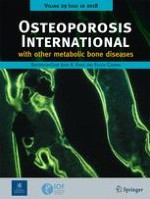 Do sarcopenia and/or osteoporosis increase the risk of frailty? A 4-year observation of the second and third ROAD study surveys

Breech presentation is associated with lower bone mass and area: findings from the Southampton Women’s Survey

Bone metabolism, density, and geometry in postmenopausal women with vitamin D insufficiency: a cross-sectional comparison of the effects of elevated parathyroid levels