Springer Nature remains neutral with regard to jurisdictional claims in published maps and institutional affiliations.
Dear Editor,
Daratumumab, an anti-CD38 monoclonal antibody, shows substantial efficacy for relapsed and refractory multiple myeloma (MM). Daratumumab also has a clinically manageable and acceptable safety profile. Grade 3–4 neutropenia was recorded in 5–12% of patients receiving single-daratumumab according to phase 1–2 trials [1, 2]. Although neutropenia was more common in daratumumab triplet therapy, the addition of daratumumab did not significantly increase documented infections and treatment discontinuation [3, 4]. Importantly, patients with absolute neutrophil count (ANC) of 1 × 109/L or less were excluded from these clinical trials. The efficacy and safety profiles in patients with baseline low ANC have not yet been elucidated. Herein, we report a unique case showing prolonged severe neutropenia after the first daratumumab dose.
Anzeige
A 70-year-old Japanese woman was found to have pancytopenia at a medical checkup and was diagnosed as MM. Very good partial response with complete resolution of cytopenias was achieved by bortezomib plus dexamethasone therapy. At the age of 73 years, increasing paraprotein concentration and progressive pancytopenia were noted during second-line therapy with ixazomib, lenalidomide, and dexamethasone. Bone marrow trephine biopsy then disclosed a hypoplastic, fatty marrow with an increase in myeloma cells and suppression of normal hematopoiesis. Treatment was changed to daratumumab plus dexamethasone therapy. Neither lenalidomide nor bortezomib was added because pretreatment ANC and platelet count were 0.66 and 60 × 109/L, respectively. Daratumumab at a dose of 16 mg/kg was administered without any infusion-related reactions. Six days later, ANC dropped to 0.17 × 109/L while platelet count remained unchanged (Fig. 1). Granulocyte-colony stimulating factor (G-CSF) and prophylactic levofloxacin were initiated. After reaching a nadir, not only ANC but also hemoglobin level and platelet count gradually improved. On day 50, blood counts returned to normal and daratumumab administration was resumed in a 28-day cycle. Hematologic adverse events never occurred during the subsequent therapy. The patient achieved partial response only after three daratumumab doses.
×
Pancytopenia is a relatively uncommon finding of MM [5]. Its pathogenesis is largely explained by replacement of the bone marrow with myeloma cells. Treatment strategy in this setting is complicated because even novel agents can further aggravate cytopenias [6]. In the current case, daratumumab efficiently eradicated myeloma cells, thereby inducing reconstitution of normal hematopoiesis. Daratumumab may serve as a promising treatment option for MM with cytopenias.
On the other hand, prolonged severe neutropenia was caused by a single daratumumab dose. Pretreatment bone marrow hypoplasia may be associated with this adverse event. Close monitoring of hematotoxicity and optimization of treatment schedule are required when MM patients with low baseline ANC undergo daratumumab therapy. G-CSF primary prophylaxis may be useful to reduce the risk of infections [6].
We should be reminded that neutropenia does not always predict favorable treatment outcomes. According to a phase 2 trial of daratumumab monotherapy, the incidence of grade 3–4 neutropenia was similar between responders and non-responders [2]. A large-scale study is warranted to further clarify the efficacy and safety profiles of daratumumab for patients with low baseline ANC.
Anzeige

All procedures performed in studies involving human participants were in accordance with the ethical standards of the institutional research committee and with the 1964 Helsinki declaration and its later amendments or comparable ethical standards.

Informed consent was obtained from all individual participants included in the study.
Open Access This article is distributed under the terms of the Creative Commons Attribution 4.0 International License (http://creativecommons.org/licenses/by/4.0/), which permits unrestricted use, distribution, and reproduction in any medium, provided you give appropriate credit to the original author(s) and the source, provide a link to the Creative Commons license, and indicate if changes were made. 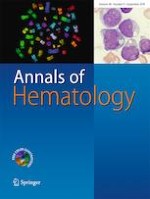 Age-dependent determinants of infectious complications profile in children and adults after hematopoietic cell transplantation: lesson from the nationwide study

BOK promotes erythropoiesis in a mouse model of myelodysplastic syndrome

Randomized phase III study (ADMYRE) of plitidepsin in combination with dexamethasone vs. dexamethasone alone in patients with relapsed/refractory multiple myeloma