A total of 180 patients underwent RRP at our hospital between 2000 and 2011. In January 2008, we started to perform a prophylaxis involving the dissection of the processus vaginalis. This procedure was performed in 73 patients. We then compared the incidence of IH between the patients that did (prophylaxis group) and did not (no prophylaxis group) undergo the prophylaxis. We also studied the risk factors for IH after RRP.

Our results suggest that our prophylaxis is useful for preventing IH after RRP. 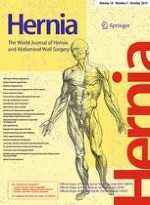