Postoperative cognitive dysfunction (POCD) is diagnosed in up to 30% patients after anaesthesia. The causative role of anaesthetic toxicity remains unclear. Using clinical tests, no clear-cut differences have been observed between anaesthetics so far. The aim of this trial was to compare the incidence of POCD diagnosed by a battery of neuropsychologic tests after propofol and sevoflurane anaesthesia. Secondary goal was to examine possible relationship between POCD positivity and changes in auditory event-related potentials (ERPs). Sixty patients undergoing lumbar discectomy were prospectively randomized to receive depth-controlled sevoflurane (SEVO) or propofol (PROP) based anaesthesia. The neuropsychological examination and auditory event-related potentials (N1, P3a and P3b components) recording was performed preoperatively and on days 1, 6 and 42 after surgery. POCD was defined as a decline of more than one standard deviation in three or more tests. In 43 patients (20 in PROP and 23 in SEVO group) all selected tests were performed and used for the evaluation. POCD was present in 48%/60%, 18%/20% and 17%/11% (SEVO/PROP) of patients on days 1, 6 and 42 after surgery, with no significant intergroup difference. Among neuropsychologic tests, the most significant decline was observed in Semantic Verbal Fluency and Letter-Number Sequencing Test scores, congruently in both groups on days 1 and 6, with full recovery on the last control. Transient deteriorations in other tests were observed as well. No association of POCD positivity and ERPs changes was found, although long-term modifications of P3a and P3b components were observed, mainly in SEVO group. In our study, sevoflurane and propofol anaesthesia was associated with the similar incidence of POCD. Cognitive decline, mainly affecting executive functions, was temporary in most of the patients. Prolonged ERPs alterations after the anaesthesia seem not to have any relationship with the impairment registered by the neuropsychological examination and may represent subclinical changes. 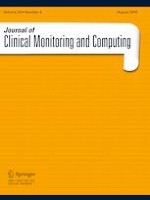 Comparison of ability of pulse pressure variation to predict fluid responsiveness in prone and supine position: an observational study

Intravenous administration of medications during an anesthetic: a deceptively simple process

What’s all that noise—Improving the hospital soundscape