The specificity of cerebrospinal fluid (CSF) dynamics in the immature brain still remains unknown. In our data previously published, the transependymal intraparenchymal CSF pathway (the minor pathway) plays a significant role in various degrees in the alternative CSF passage. Now, there is a growing consensus in the age differences in the outcome of neuroendoscopic ventriculostomy in treatment of non-communicating types of hydrocephalus. The authors discuss the clinical significance of the specific CSF dynamics and propose the new aspect of classification of hydrocephalus with a theory in the development of CSF from the pathophysiological point of view.

Between January 2001 and March 2004, 122 hydrocephalic children were registered at the Jikei University Hospital Women’s & Children’s Medical Center (JWCMC), Tokyo. Our retrospective study for the efficacy of neuroendoscopic ventriculostomy confirmed the significantly high failure rate of neuroendoscopic ventriculostomy in treating hydrocephalus in neonates and infants with non-communicating hydrocephalus as the initial impression. The prospective CSF dynamic studies using cine-mode MRI and CT ventriculo-cisternography were then routinely started. Altogether, 9 out of 29 (31%) endoscopically treated cases needed shunt placement 3–30 weeks (mean 7.9 weeks) after the endoscopic procedure(s) (publication in preparation). Five out of 11 (45%) neonates/infants under 3 months, 3/5 (60%) infants at 7–12 months, 10/10 (100%) toddlers at 1–4 years and 3/3 (100%) schoolchildren at 5–17 years were cured, as in the condition of “post-endoscopic ventriculostomy arrested hydrocephalus”. The pattern of ventriculo-cisternography in neonatal/infantile cases revealed intraparenchymal predominant pattern (minor pathway) of the CSF dynamics rather than passage in the major pathway.

The various basic investigations in rodents, cats and monkeys have suggested that CSF is absorbed not via Pacchionian bodies as the last end of the major pathway, which do not exist in these animals and are recognized after infantile period in human, but through the choroids plexus and the periventricular fenestrated venous capillaries into the deep venous channel. The high incidence of “failure to arrest hydrocephalus” by neuroendoscopic ventriculostomy in fetal, neonatal and infantile periods was considered to depend on the specific CSF dynamics, in which the major CSF pathway has not developed and the minor pathway has a significant role.

We herein propose a new aspect of classification for hydrocephalus with special reference to the CSF circulation in the minor CSF pathway, i.e. “minor pathway hydrocephalus”, differentiating the conventional classification by Dandy (communicating and non-communicating) or Russell (non-obstructive and obstructive) as “major pathway hydrocephalus”. We also herein propose a hypothesis that the CSF dynamics develop in the theory of evolution from the immature brain, as in the animals with the minor CSF pathway predominance, towards matured adult human brain together with completion of the major CSF pathway: the “evolution theory in CSF dynamics”. 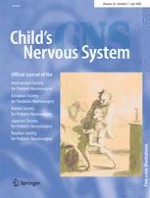 Hydrocephalus in intraspinal dermoids and dermal sinuses: the spectrum of an uncommon association in children