A prospective study was performed on patients who were diagnosed with ACL injury and underwent ACL reconstruction. Eighty-four male patients who were followed for at least 2 years were analyzed in this study. Forty-four patients were operated by single-bundle technique, and 40 by double-bundle technique. SF-36, Lysholm score, anterior tibial translation, and pivot shift were assessed before surgery and 6, 12 and 24 months after surgery.

In the preoperative SF-36 survey, the scores of almost all the subscales were lower than the national standard scores in both groups. After operation, the scores of all the subscales improved to the national standard values in all patients, but no difference was observed between two groups. Lysholm score, distance of anterior tibial translation and pivot shift positive rate improved significantly after operation in all patients, but there were no significant differences between two groups.

Although good clinical results have been reported for double-bundle ACL reconstruction, some studies reported no clear difference compared to the conventional single-bundle technique. In the present study, significant improvements were achieved after operation in both groups, confirming the usefulness of both techniques. No clear merit of one method over the other was found, not only from the conventional objective assessments but also from the patient-based subjective evaluation. 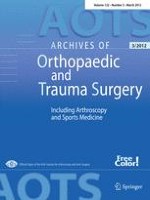 Total hip arthroplasty: to cement or not to cement the acetabular socket? A critical review of the literature