We identified SLNs in 73 clinically node-negative breast cancer patients using an RVS system to display in real time a virtual MPR obtained from CT volume data corresponding to the same cross-sectional image from ultrasonography (US). CT volume data were obtained using our original 3DCT–LG, which accurately detects SLNs in breast cancer. We then prospectively attempted to predict metastasis to SLNs. SLN metastases were assessed by measuring the cortex thickness in the presence of a visible hilum. We defined suspected SLN metastases as SLNs with a cortex thickness of at least 2.5 mm on the basis of our preliminary data. All patients underwent SLN biopsy and SLN metastases were examined pathologically with serial 2.0-mm-thick multiple slices.

Suspected SLN metastases were identified in 24 of 73 patients, and 13 of these 24 patients were pathologically positive. The remaining 49 patients displayed no suspected SLNs, and 46 of these 49 were pathologically negative. Sensitivity, specificity, positive predictive value, negative predictive value, and overall accuracy of measuring cortical thickness for predicting metastatic involvement of SLNs were 81, 81, 54, 94, and 81%, respectively. 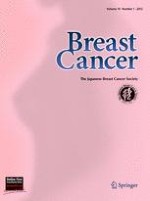