The Caribbean population of Guadeloupe has one of the highest incidence rates of prostate cancer worldwide. In 2008, a population-based cancer registry was set up for the monitoring of cancer incidence in the aftermath of the environmental pollution with chlordecone, a persistent organochlorine insecticide formerly used in banana plantations. We describe the clinical presentation, incidence, mortality and survival of prostate cancer for the period 2008–2013.

The Guadeloupe cancer registry has been routinely collecting all incident cases of cancer since 2008. We compared age-specific incidence rates between different populations, and calculated incidence and mortality rates standardized to the world population. Kaplan–Meier observed survival and estimated age-standardized net survival were calculated by category for age, PSA level, and Gleason score using the Pohar-Perme method.

The incidence of prostate cancer in Guadeloupe is among the highest in the world, along with those of the neighboring Caribbean countries and US African-Americans. We observed no decrease in incidence rates, and a decreasing but non-significant trend in mortality rates, which nonetheless remain higher than in high-income countries. Many Genome-Wide Association Studies are conducted to identify genetic markers involved in prostate cancer risk. In the Caribbean, complementary studies on both lifestyle and behavioral factors should highlight potential common risks among populations who share both genetic and environmental characteristics. 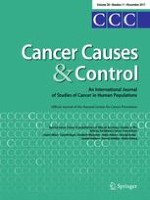 Gatekeepers’ perceptions of the quality and availability of services for breast and cervical cancer patients in the English-speaking Windward Islands: an exploratory investigation

Cancer in populations of African Ancestry: studies of the African Caribbean Cancer Consortium